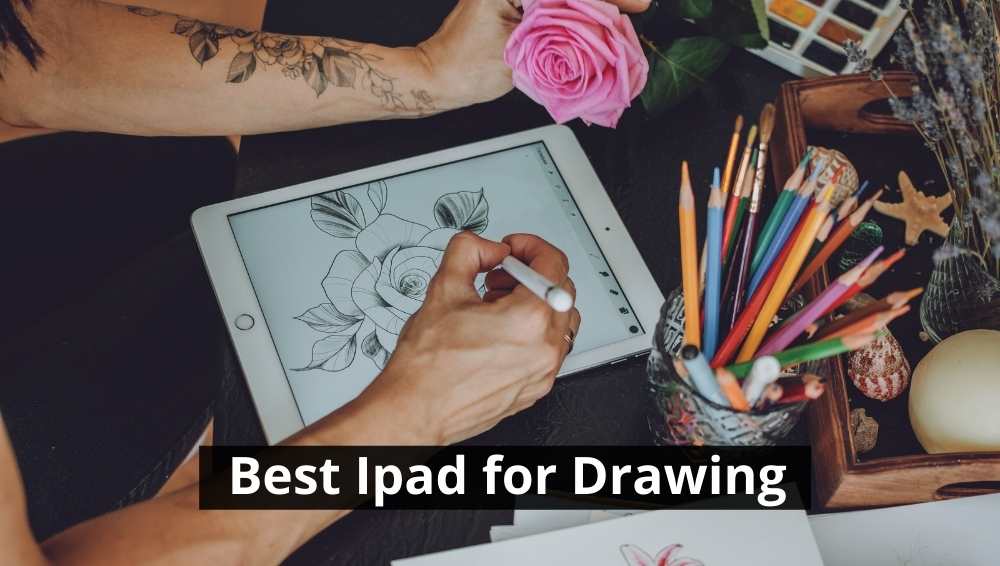 Drawing is a passion that started from the time the first man picked up a pencil and started to scribble on a paper. Every person has a different approach to drawing.

There are some who draw digitally and others who prefer the traditional pencil and paper approach to drawing. Digital art is a recent development in the world of drawing.

There is a wide range of apps and gadgets now available for those who prefer digital art. iPad is one of such gadgets that is extremely convenient since you do not need to carry around a laptop.

Instead, you can carry around a small device and use it in the same way. A drawing tablet can help you be more productive while also helping you make art on computer software.

Depending on your needs, there are different types of tablet computers you can buy. This blog will look at some best iPad for drawing.

There isn’t much to say about the iPad Pro in its 11-inch form factor for the year 2021. In comparison to the 12.9-inch model and the 10.9-inch iPad, the 11-inch iPad Pro provides a fantastic balance between portability and power and is a great alternative for those who prefer a smaller screen size.

This implies that the 11-inch iPad Pro has roughly the same physical dimensions as the previous 10.9-inch iPad Air model, albeit with a somewhat larger screen on the retina display.

The difference may not appear to be significant, but when dealing with screens that are approximately one foot in size, even the smallest variation can have a significant impact.

With an 11-inch screen, it is still a reasonable size for drawing, taking photos, and engaging in other creative activities. The larger 12.9-inch screen is still my preferred option.

Due to the fact that the 11-inch is still just equipped with a normal Liquid Retina display, the 12.9-inch outperforms it in terms of HDR content, bright colors, and the darkest blacks.

The normal Liquid Retina display, on the other hand, continues to look fantastic. It should still be a fantastic screen for anyone who works in the arts or graphic design and places high importance on portability over power.

It is the greatest overall iPad for the majority of people since it strikes a balance between the lower-priced (iPad 8th generation) and the larger screen real estate (iPad Pro 2020 series).

With a screen size of 10.9 inches, the iPad Air provides ample space for drawing and painting, as well as serving as a great portal for viewing and editing photographs.

The iPad Air 4 also has something that is certain to be quite useful for a wide range of drawings. Unlike the more affordable iPad models, which can only support the first-generation Apple Pencil, the iPad Air 4 can take advantage of the full range of sensitivity and functionality of the Apple Pencil 2, which is a significant upgrade.

As with the iPad Pro, it charges when it’s latched to the side of the iPad Air 4, so you don’t have to bother about plugging it into the Lightning connector on the iPad Air 4. In addition, the Air sports a True Tone display that is laminated.

Laminated displays merge the touch layer of your iPad’s screen with the LCD display layer into a single piece that does not have any gaps between the two layers of glass.

Because it adjusts the display’s temperature to match the light in your present environment, True Tone gives the appearance that the display is being lit by the room itself, which is a terrific feature.

However, if you discover that it is interfering with your artistic productivity, it is simple to turn off from Control Center by selecting the appropriate option. The most important considerations are screen size, design, and feature set.

Those looking for the absolute finest iPad for drawing in 2021 will want to go no farther than the most recent iteration of the 12.9-inch iPad Pro. It is expensive but is the most powerful tablet Apple that has ever been produced, with an even better display.

Its 12.9-inch display is an excellent canvas for creative art, whether you’re drawing, painting, or editing images and it allows you to remain mobile while doing so.

Apple’s new Liquid Retina XDR display on the 12.9-inch iPad Pro provides outstanding color accuracy and displays high dynamic range (HDR) photos and video in their full glory. In this way, you’ll get the deepest blacks and the most brilliant colors.

It is also a ProMotion display, which means that it can display images at up to 120 frames per second. ProMotion, on the other hand, is about far more than just running at 120Hz.

In addition, it implies that the display will alter dynamically in response to the content displayed on the screen. The M1 chip is the same one that is present in the most recent generation of iMacs, MacBook Airs, and MacBook Pros.

This means you’ll receive an 8-core processor, with four of those cores dedicated to performance and the remaining four dedicated to efficiency.

This additional capability can be extremely beneficial for drawing programs such as Procreate and photo editors such as Pixelmator Photo, as it allows for smoother painting and sketching experiences as well as faster photo editing.

Look no farther than the 8th-generation iPad if you’re on a tight budget but still want the most powerful iPad for drawing on the market (2020).

Although this is the entry-level iPad, it is nevertheless a fantastic tool for drawing, especially because it has support for the first-generation Apple Pencil.

The A12 Bionic chip is still more than capable of doing basic drawing and sketching tasks, as well as video viewing, reading, and writing, among other things.

With the iPad, you get a stunning 10.2-inch LCD Retina display that displays graphics and text that are extraordinarily sharp and detailed.

Despite the fact that this is the second-smallest display in the series, it still provides plenty of space to draw and sketch with your Apple Pencil while using the best drawing apps available on the App Store.

It goes without saying that you’re receiving the greatest iPad stylus available, and it works flawlessly with your iPad. The use of tilt and pressure sensitivity, as well as palm rejection, will allow you to draw smoothly and without leaving any unpleasant markings on your sketch.

Just keep in mind that the first-generation Apple Pencil can only be recharged by Lightning and does not support wireless charging, unlike the Apple Pencil 2 and later models.

Furthermore, because the first-generation Apple Pencil is totally cylindrical and has a flat edge, it may be prone to roll when placed on a smooth surface.

Things to Keep in Mind While Buying Ipad for Drawing

Consider the following points while buying the best iPad for drawing that you would like to have.

The storage capacity of the majority of iPads ranges from 16 gigabytes to 128 gigabytes (though some models, such as the iPad Pro, support up to 256 gigabytes).

The majority of iPads now on the market will enable cellular data, which means you can add the iPad to your existing cellphone plan and utilize the data from the relevant account to access the internet in regions where there is no wi-fi.

While the original generation of iPods and the iPad Mini-series do not have subpar processors, the iPad Air and iPad Pro lines are designed specifically for performance.

If you plan to use a lot of high-end apps (such as photo editing software), you should avoid purchasing the iPad Mini-series and the iPad Air.

iPads are not inexpensive devices. If you’re on a tight budget, you’ll probably want to go with a more vintage design (e.g., one of the original iPad).

Alternatively, you can purchase a newer iPad Mini, which will trade some of the performance of a larger iPad in exchange for a lower cost.

FAQs Related to Ipad for Drawing

Is it safe to make purchases on an iPad?

What is the point of buying an iPad?

For starters, unlike the iPhone, the iPad can run two apps side by side, allowing you to be more creative with how you utilize the device.
Because of its larger screen, an iPad can perform tasks that are difficult to perform on an iPhone, such as handling spreadsheets and word processors. With the exception of making phone calls, the iPad is superior for almost every task.

Drawing is an art form that is an important part of the design. It is important to have the right tools for the job. Drawing on an iPad can be a lot of fun, but you need the right apps.

This blog has enlisted the best iPad for drawing which will help you to find the required job.

For more information about drawing IPads/tablets visit our website.