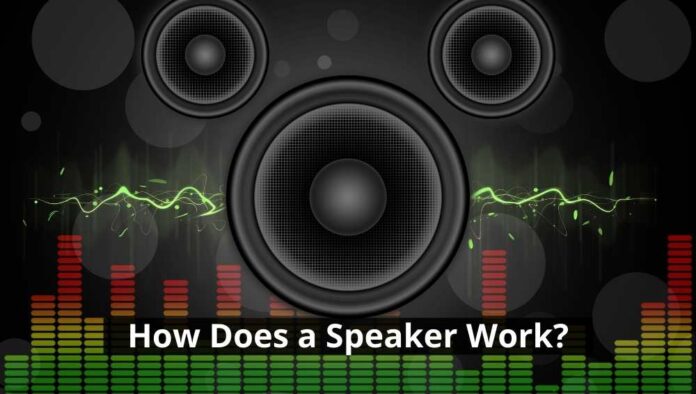 Speakers push and pull air molecules into waves that are interpreted to be sound by the human ear. You may even say that hearing is the detection of movement. So, what makes a speaker travel back and forth at the correct speed and distance.

A lot of people probably don’t know how does a speaker actually works. Sure, you can get a speaker from a store and plug it in and it will work.

A speaker works by converting the electrical signals coming from an audio file or microphone into sound waves that can be heard by the listener.

The process of converting electrical signals into sound waves is not a simple one. Speakers are a tricky thing to get right. They have to be loud enough to be heard, but not too loud that they burst your eardrums.

They have to have a good frequency response, but not a response that makes the sound tinny. This blog will provide you a good overview of how does a speaker work and what the different types of speakers are.

What are the Parts of a Speaker?

Before learning about the working of the speakers, you should need to know about its components.

The components of a speaker are:

These are all the visible parts of a speaker. What happens inside the system that moves the cone? While most people know that a magnet is in a speaker, the function of a standard speaker involves the use of two magnets, the fixed magnet and a voice coil. For setting all this you have to know about speaker working.

Step by Step Guide: How does a Speaker Work?

Here’s a step by step description of the workings of speakers:

Frequency Responses and Why are they so Important for Speaker Working?

Frequency response is how loud a speaker’s output is at various frequencies. A standard frequency answer test transmits the frequencies from the bass down through the middle and up to the triple range to examine whether the sound from the speaker is identical in all these locations.

The aim of a flat frequency response is to ensure that listeners receive your music as they intended. If your audio is well mastered and sounds nice for flat-answered speakers, you can be sure it sounds best for a replay system.

Production of Sound in Relation to Speakers

Sound moves in waves of pressure. We hear it as sound when air particles are compressed and rarified rapidly enough. The faster the air pressure changes, the higher the sound frequency we hear.

When a speaker moves back and forth, air particles are pushed, changing air pressure and producing sound waves. There is a fabric, paper or lightweight metal cone on the front of a loudspeaker (also termed a diaphragm) not unlike a drum skin (colored grey in our picture below).

When you connect the loudspeaker to a stereo, electrical signals are transmitted into the spiral via the speaker cables. The spindle becomes a transient magnet or electromagnet.

The electromagnet either attracts or repels a permanent magnet as energy goes back and forth through the lines. This moves the belt back and forth, pulls and pushes the loudspeaker cone.

How do the magnets in speakers work?

The voice spindle is attached to the cone inside a speaker and is put in front of a permanent magnet set in position. The cone enhances the vibrations caused by the movement of the voice belt that pushes sound waves out of the speaker and into the air around it.

What makes a speaker loud?

Loudspeakers play loud when a large number of the cone vibrates, or softly if it moves a tiny quantity. Likewise, injecting a larger pulse of power into a loudspeaker moves the cone further and produces a louder noise. Silent sounds are created by smaller electric pulses.

Speakers are a tricky thing to get right. They have to be loud enough to be heard, but not too loud that they burst your ear drums. They have to have a good frequency response, but not a response that makes the sound tinny.

To set all these things one should need to know how does a speaker works and it is a subject that has been discussed in the following article.

The 4 Best in Ceiling Speakers

How to Tell if a Speaker is Blown?