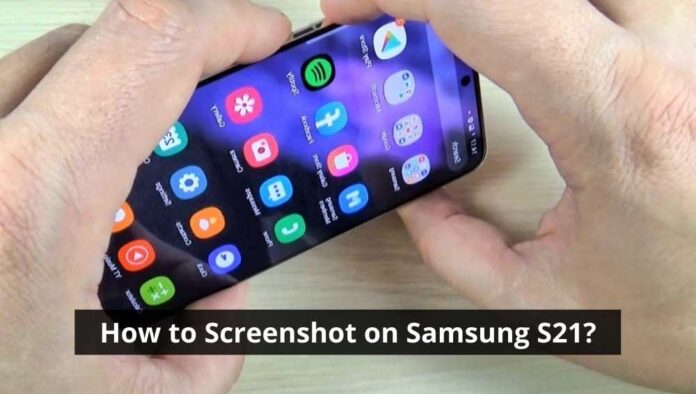 A screenshot is a picture of your screen you can take using your phone or computer. Screenshots are useful for preserving something that would be difficult to describe in words, such as an error message.

You may also want to share the screenshot with someone else on social media without having to type out what happened.

Screenshots are an important part of the blogging process, as they can quickly show what we’re writing about without having to go into detail.

In this blog post, we will cover how to screenshot on Samsung S21? We’ll discuss the various methods of taking screenshots and some helpful tips for getting them just right. Keep reading if you want to learn more.

How to take a Screenshot using Physical Buttons?

Here is the step-by-step guide to taking a screenshot by using physical buttons.

Related Post: How to Take a Screenshot on Samsung?

How to take a Screenshot by using Palm Swipe?

Here is the step-by-step guide to take screenshots by using a palm swipe.

How to take a Screenshot using Smart Select?

Here is the step-by-step guide to taking screenshots by using Smart Select.

How to take Screenshots by using Digital Assistance?

Here is the step-by-step guide that helps you to take a screenshot using digital assistance.

How to Screenshot the Entire app Window?

Capture the whole scene by extending your screenshot. If you’re in an app or web page longer than a screen can show, extend it down to capture the entire scene.

After taking the screenshot, tap and hold on its icon next to preview represented as two arrows pointing down inside a box until scrolling is complete for maximum coverage of content shown at one time with no missing pieces such as ads that may have been obscured during viewing before reaching a bottom portion of webpage/app window which then scrolls up automatically once the release has occurred when hovering over the top edge after waiting approx. 5-10 seconds depending upon size and length from the beginning visible area currently showing contents viewed versus amount viewable below where pause was initiated while continuing upwards motion takes place simultaneously. Release the button when you captured the desired portion of your page.

How to take screenshots of other models of Samsung?

of the models that use volume down and power buttons to capture screenshots then pressing them at once will do so; for other models like S8+, Note 8, or newer smartphones where they have moved those keys around then press the Power button + Volume Down key simultaneously (the location could also change).
Some more recent devices support the palm swipe-to-snap feature which is off by default but can turn it under Settings > Advanced Features > Palm Swipe Capture respectively. Saying, Hey Bixby! take a screenshot: works well with some older version phone too though not all as detected earlier in this article when we mentioned about how these methods.

How to power off your Samsung?

The Samsung Galaxy S21 is powered down by swiping the quick settings panel, tapping on power, and restarting your device. To do this simultaneously press the Side button + Volume Down while holding it for around three seconds until you feel a vibration or hear an audible alert sound to stop pressing buttons.

Screenshots are a great way to capture what’s on your phone or tablet screen and share it with someone else. Taking screenshots is easy, too. There are many different ways to take screenshots on Samsung S21.

First of all, you can hold down the Power button and home button at the same time for about two seconds until you see an animation that shows how much battery power has been used up from taking this screenshot (this only works if there’s enough charge left).

You can also press both volume buttons together for three seconds – but make sure they’re not mixed up because holding them in opposite directions will turn off your device instead.

I hope that this article will help you understand how to screenshot on Samsung S21. If you have any queries regarding this, then you may tell us in the comment section. You will surely be happy to give you answer.

For more information about Samsung phones visit other blog posts on our website.

Why is my Samsung Galaxy Tablet so Slow?

How to Set up Voicemail on Samsung?