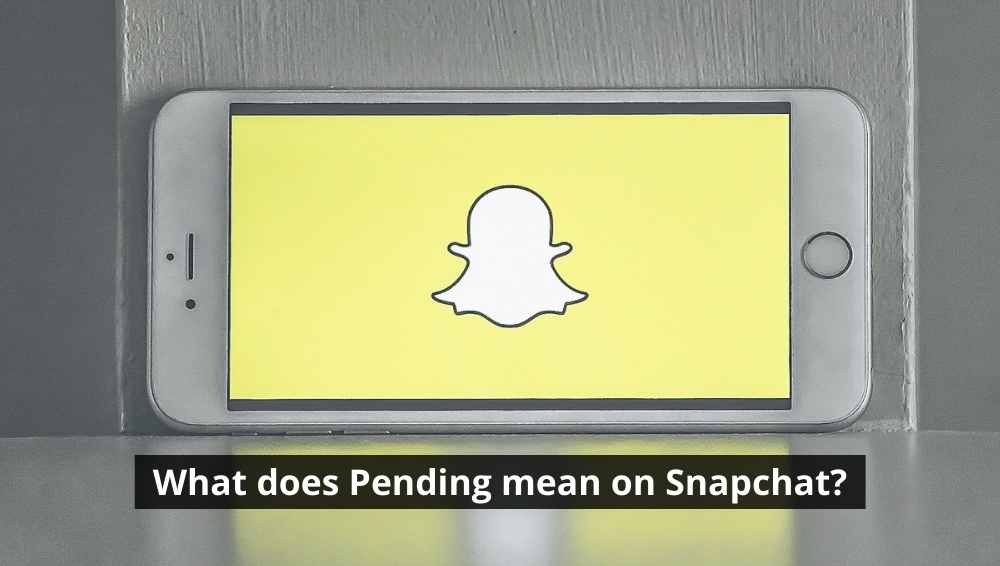 In the world of social media, Snapchat is a real player. In fact, the platform itself grew 47% from 2015 to 2021. This makes it one of the fastest-growing social media app available today.

It allows you to share photos and videos that can be viewed by the receivers for just a limited period of time, but only if the recipient of the snap has opened the snap that has been sent.

Even if you have been using the app very regularly, it is quite likely that you don’t know all the aspects of the app. So, here, we take a look at a few of the common queries that people have about Snapchat.

It is important for you to understand the definition of a friend that may be different for you and your frenemy. If you have been using this platform lately, you may have noticed the “Pending” message.

In this blog, we will go over what does pending mean on Snapchat, and how it impacts the user experience.

Steps of What does Pending mean on Snapchat?

So, what is the deal with Snapchat’s “pending” status? The “pending” label indicates that Snapchat has not yet been able to transmit the message to the recipient.

In contrast to a generic problem notification, however, a Snapchat pending warning also indicates that the app will continue to attempt to send until either the message is received or you actively cancel the entire sending process.

When the term “pending” appears next to a message on Snapchat, it indicates that the app is experiencing difficulties delivering the message.

You are not Friends Yet

In addition, a grey arrow will display next to the word in question. This often indicates that you are not friends with the individual to whom you are attempting to send the message.

Alternatively, your Snapchat buddy could have deleted your account, or their entire Snapchat account, due to an error on your part.

Alternatively, it is possible that the individual has not yet accepted your Snapchat friend request. Because you do not receive direct notification when someone unfriends you on Snapchat, the “pending” message is really a useful tool for determining whether someone has unfriended you.

The App is not Working Properly

There’s also a potential that your message is still “waiting” because the app is having technical difficulties. If you want to double-check, deleting and then reinstalling Snapchat would be a good idea.

You have been Blocked by another User

Say you have added someone on Snapchat and the Snapchat Pending notice occurs after a while. The fact that you are unable to send snaps to that person or use any other Snapchat function to communicate with them has been brought to your attention.

It’s possible that the person you’re attempting to contact has blocked you from communicating with them. If you have been blocked, you will no longer be able to view the profile of the other person.

Snapchat, on the other hand, has the ability to delete accounts at any time, and snaps sent to such profiles will be labeled as ‘Pending’.

Note: The grey “pending” arrow is also dependent on the Snapchat settings of the user. If you send a Snapchat to someone who accepts messages from everyone, even strangers, you should not see the grey arrow appear on the screen.

As a bonus, you’ll still be able to see public Snapchat content from people who aren’t currently your friends. It’s possible that your friend did not get your Snapchat friend request because they were distracted by another platform. If this is the case, try reaching out to them through another site.

What to do if you have a Pending Snapchat Message?

If you receive a Snapchat awaiting message issue, there are a few things you can attempt to resolve the situation.

Check your Cellular and Internet Connections

Check your cellular and internet connections to ensure they are working properly. Check that your iPhone or Android smartphone has a strong mobile signal and that the Wi-Fi connection on your tablet is operational if you are using one.

Immediately turn off Wi-Fi and connect to your cellular network if one is available if you feel that the Wi-Fi has stopped functioning properly.

Send a Snapchat Message to a Different Friend

Send a Snapchat message to a different friend to see if it works. It’s the quickest and most accurate approach to determine whether the issue is technological in nature or relates to a specific Snapchat friend who may have unfriended or blocked you.

In the event that you’re fed up with waiting for a contact to accept your Snapchat friend request, you can send them a direct message on Twitter, WhatsApp, Discord, Telegram, Vero, or another messaging app to give them a nudge. However, it is recommended that you wait at least 24 hours before doing so.

Carry on with Dignity

If someone has unfriended or blocked you on Snapchat, the best course of action is to move on because any further communication attempts may be interpreted as harassment or bullying.

Restart your Device if it hasn’t Already

If all of your messages are showing a pending error, it’s possible that the Snapchat app is having technical difficulties. A simple restart of your iPhone or Android smart device will frequently resolve issues such as these and other similar ones.

Check to see if Snapchat is Unavailable

There are numerous techniques to determine whether or not the entire Snapchat service has been rendered inoperable.

Is the blue color a representation of Pending on Snapchat?

The arrows in blue indicate Delivered that you have sent a Snapchat message to someone, but that it has not yet been received. It has yet to be delivered or opened by the intended recipient.
Because the individual isn’t present on Snapchat and the message isn’t reaching his Snapchat account owing to network troubles or something else, this is an indication of a problem.

What is the duration of the Pending messages on Snapchat?

If he is not a buddy of your on Snapchat, your snap will not be delivered to his phone. As long as the individual agrees to your request, the message is delivered successfully. However, if you do not comply, your messages will be removed during the next 30 days.

Snapchat is different from other social media applications. When you become acquainted to all of the features and functionalities, it’s a great way to connect with friends, share entertaining content, and stay in touch.

If you notice the word ‘Pending’ next to the sent snaps on your Snapchat, read this article to understand what it means. As this article has described what does pending mean on Snapchat.